Last week I read through an article in the Hindu titled, You can't read this Book by Hasan Suroor. It had a list of books that had been banned in India, first by the British and then by their Indian successors. In most cases the ban is on the import of the book, and as Salman Rushdie said in this hard hitting speech yesterday at the India Today Conclave, 2012, the Indian Customs department by a "sleight of hand" ban the import of the book without proscribing reading it. You can find the notifications of the Indian Custom department here, here,  here and here inter alia. I thought it might be a good idea find electronic copies of these banned books, already freely available on the internet, because the juvenile import bans by the Indian government trample on our right to freedom of expression and the moment we stop fighting for our rights, we lose them. 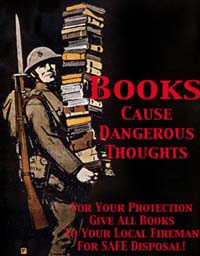 We are free to disagree to a small or large degree with any of the following books and are completely entitled to hold such opinions and take up the matter with the publisher/author. I personally am not in agreement with many of the views mentioned in the books below and do not endorse any opinion by the belowmentioned authors, however, throttling of the right to freedom of expression should not be tolerated. If have full right to be offended by any of these books, but violently acting on such feeling is not permitted.

Do remember Voltaire famous statement: "I do not agree with what you have to say, but I'll defend to the death your right to say it."

Here's a list of the books famously banned in India and links to their electronic copies for reading and download (if available). Please feel free to email me the links/copies of other banned books on mail [at] arjunsheoran [dot] com, that you know of or find, so that they can be included on this archive - this is a work in progress.